“After experiencing two strokes and an extremely bad case of pneumonia, I knew my time left in this world was limited. And no matter what age you are, you are never truly prepared to deal with this realization.” 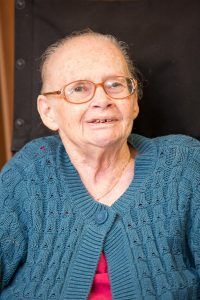 My name is Irene Mentel and this is my story of how Fairview has singlehandedly been the best thing that has happened to me in my old age.

I first came to Fairview place after having my first stroke. While I was admitted here I got the unfortunate news that my best friend of 58 years had passed away. There was no way in the world I could afford to miss the service so I went. I don’t remember how that day ended since I was found slumped in a chair, at the end of it.

I had had my second stroke.
My daughter immediately brought me back to Fairview. The doctors here took my tests and analyzed my reports. They found out that I had pneumonia and also found a spot on my lung. The spot was an infection and had to be treated immediately. They tried dealing with it through antibiotics first but since they were not showing effective results, surgery was the last resort.

My health at that point had deteriorated so much that the doctors were skeptical of my chances of staying alive, even for the weeks to follow. They told my daughter to be prepared for the worst and to start arranging for a funeral.

My daughter was devastated on learning this bit of news. It so happened that at that same time, there was a mass going on in the recreation room at Fairview. With the help of the bishop there, my daughter arranged a sacrament for me. Despite the terrible health condition I was in at that time, I found the sacrament to be extremely spiritually uplifting.

Everyone was convinced that my time to go was very close. Even the doctors said there was nothing more they could do, than what they already have.

After everybody left and I was still at Fairview, things began to change a little…and for the better. Two weeks later after my sacrament, my health started to improve. The hospice care facilities at Fairview really were a blessing for me.

The first thing that occurred to me was to call my daughter and have her come see me. She was shocked to receive my call and hear me speak so well, only to be shocked even more when she came down to Fairview to see me!

She told me that I looked significantly better as compared to the last time she saw me.

And she wasn’t just saying that to make me feel better. I could pretty much feel the improvements in my health on my own too. My weight which had dropped down to 80 pounds started to get back to normal; I now stand at 122 pounds and have not lost any since the last 3 months!

My ability to think and reason for myself which was starting to diminish is also making its way back. My sense of general wellbeing has also restored itself and I am now so much happier too.

I have only the staff at Fairview and God to thank for my recovery. I believe that the love, care and affection they gave me, when it was paired with God’s mercy for me did what no medicine, no surgery could ever do.

My health and I are at a much better place now. My daughter visits me with my grandson regularly and it brings me great joy to see them both. When they are not here even then I have my hands full since there are just so many wonderful things to do at Fairview to keep me happily occupied.

I intend on staying at Fairview for a while longer, till March next year, so that I can regain my ability to walk without assistance. I use a walker to walk to and from my room to the dining area, but I know I will be able to do much more.

“And I am certain that if there is any place which can get me walking on my own again it is undoubtedly Fairview Rehab and Nursing Home.”